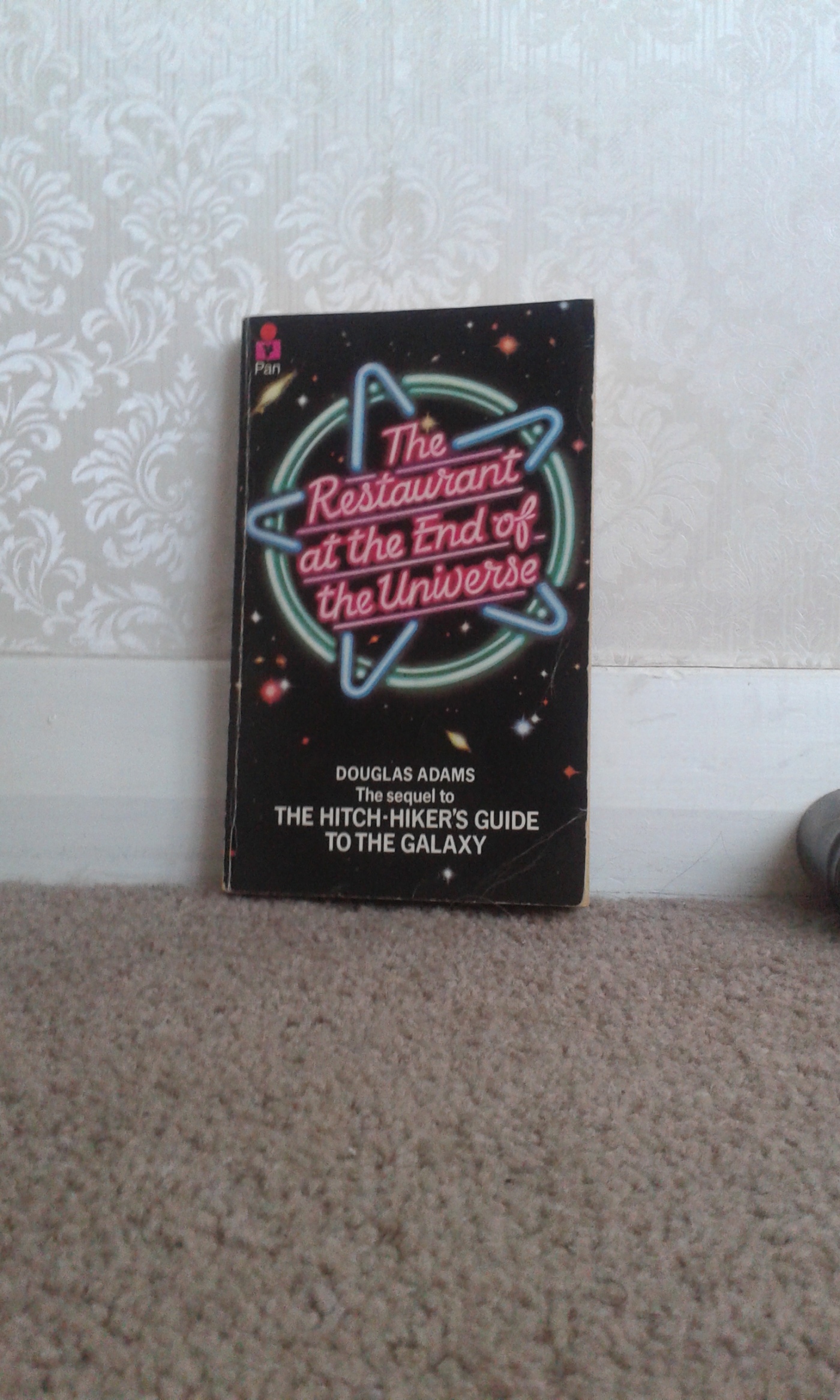 Facing annihilation at the hands of the warlike Vogons is a curious time to have a craving for tea. It could only happen to the cosmically displaced Arthur Dent and his curious comrades in arms as they hurtle across space powered by pure improbabilityband desperately in search of a place to eat.
Among Arthur’s motley shipmates are Ford Prefect, a longtime friend and expert contributor to the Hitchhiker’s Guide to the Galaxy; Zaphod Beeblebrox, the three-armed, two-headed ex-president of the galaxy; Tricia McMillan, a fellow Earth refugee who’s gone native (her name is Trillian now); and Marvin, the moody android who suffers nothing and no one very gladly. Their destination? The ultimate hot spot for an evening of apocalyptic entertainment and fine dining, where the food (literally) speaks for itself.
Will they make it? The answer: hard to say. But bear in mind that the Hitchhiker’s Guide deleted the term “Future Perfect” from its pages, since it was discovered not to be!

And here’s my personal copy: 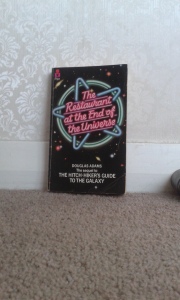 I wasn’t a big fan of the first book. Really, I’m not sure why I picked up the second one, aside from the fact that we happen to own it…
It was very much like The Hitchhiker’s Guide to the Galaxy , unsurprisingly. It has the same randomness, never seeming like it’s actually going anywhere. Yet somehow, it still holds my attention… I’m not on the edge of my seat, but I’m not bored.
This one incorporated some time travel, which I liked. The restaurant is not “at the end of the universe” in the sense that it’s the last thing. You go there, and you get to witness the universe ending. How cool is that? Then, you go back to wherever you came from. Take me there, please!
As well as going there (and abandoning poor Marvin), the gang also got to see the original creation of Earth. Honestly, we seem kind of doomed from that perspective… That bit was probably my highlight, as the boys tried to convince the people on the ship that they were morons. Oh, and Arthur taught the cavemen to play Scrabble.
The best part of this book is the world that’s been created. Adams has thought so much about what he wants to write about, and all the intricate little details that make this world fit together. He makes things up, that seemingly have no sense to them whatsoever, but they remain consistent throughout the book. I would love to see his notes on this universe; they must be so extensive, with everything that’s been created.
Overall, a nice, short read. Not one of the best books I’ve ever read, but definitely not one of the worst